You can write Pinpoint profiler plugins to extend profiling target coverage. It is highly advisable to look into the trace data recorded by pinpoint plugins before jumping into plugin development.

In Pinpoint, a transaction consists of a group of Spans. Each Span represents a trace of a single logical node where the transaction has gone through.

To aid in visualization, let’s suppose that there is a system like below. The FrontEnd server receives requests from users, then sends request to the BackEnd server, which queries a DB. Among these nodes, let’s assume only the FrontEnd and BackEnd servers are profiled by the Pinpoint Agent. 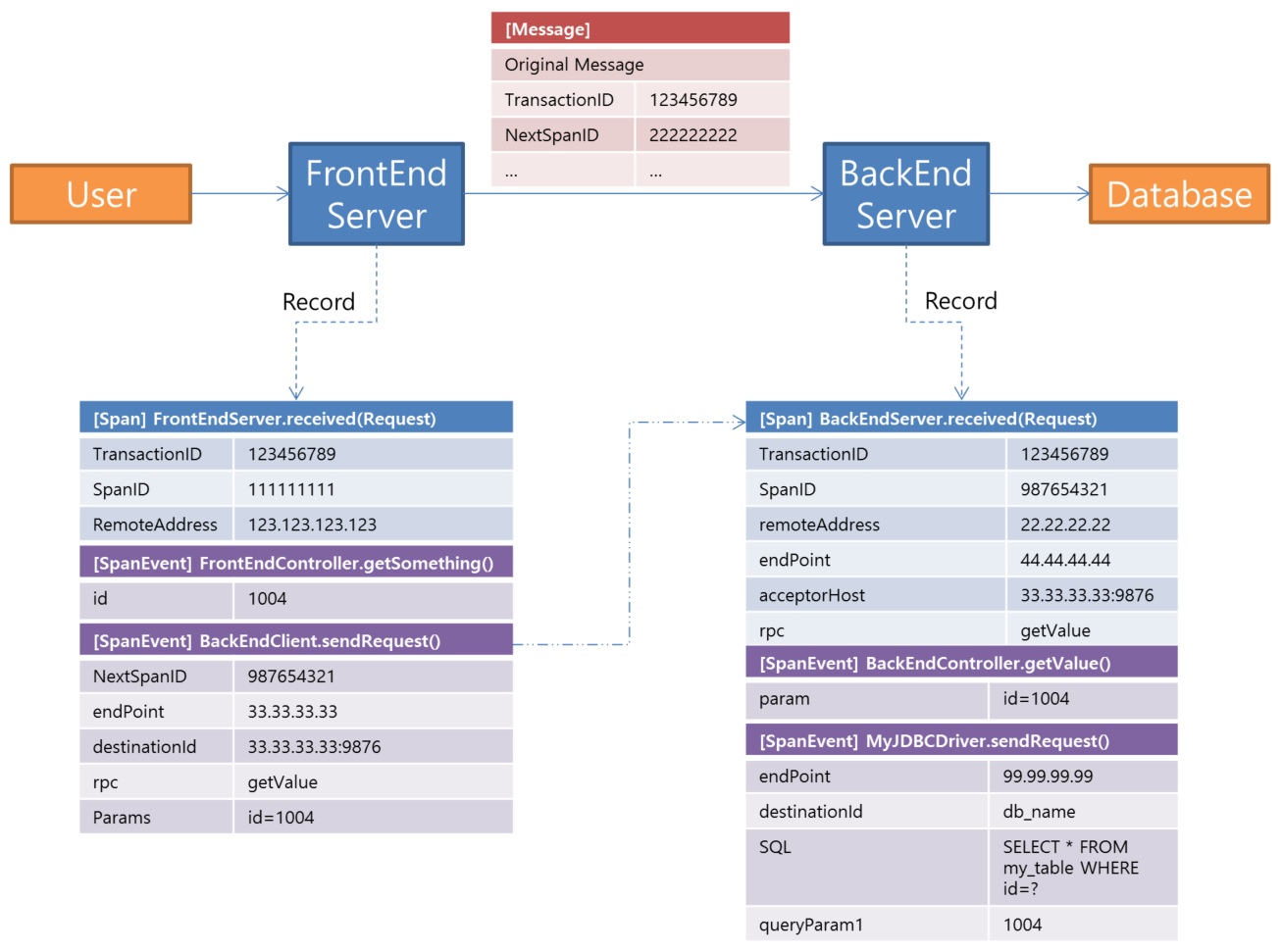 Span and SpanEvent have many fields, but most of them are handled internally by Pinpoint Agent and most plugin developers won’t need to worry about them. But the fields and data that must be handled by plugin developers will be listed throughout this guide.

Plugins are deployed as jar files. These jar files are packaged under the plugin directory for the agent, while the collector and web have them deployed under WEB-INF/lib. On start up, Pinpoint Agent, Collector, and Web iterates through each of these plugins; parses type-provider.yml, and loads ProfilerPlugin implementations using ServiceLoader from the following locations:

Here is a template plugin project you can use to start creating your own plugin.

type-provider.yml defines the ServiceTypes and AnnotationKeys that will be used by the plugin and provided to the agent, collector and web; the format of which is outlined below.

The table below shows the ServiceType’s properties.

ServiceType code must use a value from its appropriate category. The table below shows these categories and their range of codes.

ServiceType code must be unique. Therefore, if you are writing a plugin that will be shared publicly, you must contact Pinpoint dev. team to get a ServiceType code assigned. If your plugin is for private use, you may freely pick a value for ServiceType code from the table below.

ServiceTypes can have the following properties.

You can annotate spans and span events with more information. An Annotation is a key-value pair where the key is an AnnotationKey type and the value is a primitive type, String or a byte[]. There are pre-defined AnnotationKeys for commonly used annotation types, but you can define your own keys in type-provider.yml if these are not enough.

If you are writing a plugin for public use, and are looking to add a new AnnotationKey, you must contact the Pinpoint dev. team to get an AnnotationKey code assigned. If your plugin is for private use, you may pick a value between 900 to 999 safely to use as AnnotationKey code.

The table below shows the AnnotationKey properties.

You can find type-provider.yml sample here.

ProfilerPlugin works in the order of following steps:

The most important points to consider when writing a plugin are 1) figuring out which methods are interesting enough to warrant tracing, and 2) injecting interceptors to actually trace these methods. These interceptors are used to extract, store, and pass trace data around before they are sent off to the Collector. Interceptors may even cooperate with each other, sharing context between them. Plugins may also aid in tracing by adding getters or even custom fields to the target class so that the interceptors may access them during execution. Pinpoint plugin sample shows you how the TransformerCallback modifies classes and what the injected interceptors do to trace a method.

We will now describe what interceptors must do to trace different kinds of methods.

Plain method refers to anything that is not a top-level method of a node, or is not related to remote or asynchronous invocation. Sample 2 shows you how to trace these plain methods.

2.2 Top level method of a node

Top level method of a node is a method in which its interceptor begins a new trace in a node. These methods are typically acceptors for RPCs, and the trace is recorded as a Span with ServiceType categorized as a server.

How the Span is recorded depends on whether the transaction has already begun at any previous nodes.

If the current node is the first one that is recording the transaction, you must issue a new transaction id and record it. TraceContext.newTraceObject() will handle this task automatically, so you will simply need to invoke it.

If the request came from another node traced by a Pinpoint Agent, then the transaction will already have a transaction id issued; and you will have to record the data below to the Span. (Most of these data are sent from the previous node, usually packed in the request message)

Moreover, you must also use the span id issued and sent by the previous node.

As you can see, the client plugin must be able pass trace data to the server plugin, and how to do this is protocol dependent.

You can find an example of top-level method server interceptor here.

An interceptor of a method that invokes a remote node has to record the following data:

The interceptor’s recorded ServiceType must be from the RPC client category.

You can find an example for these interceptors here.

If the next node is not traceable, your ServiceType must have the TERMINAL property.

If you want to record the destinationId, it must also have the INCLUDE_DESTINATION_ID property. If you record destinationId, server map will show a node per destinationId even if they have same endPoint.

Also, the ServiceType must be a DB client or Cache client category. Note that you do not need to concern yourself about the terms “DB” or “Cache”, as any plugin tracing a client library with non-traceable target server may use them. The only difference between “DB” and “Cache” is the time range of the response time histogram (“Cache” having smaller intervals for the histogram).

The initiating method’s interceptor has to issue an AsyncContext and pass it to the handling method. How to pass this value depends on the target library. In worst cases, you may not be able to pass it at all.

The handling method’s interceptor must then continue the trace using the propagated AsyncContext and bind it to it’s own thread. However, it is very strongly recommended that you simply extend the AsyncContextSpanEventSimpleAroundInterceptor so that you do not have to handle this manually.

Keep in mind that since the shared object must be able have AsyncContext injected into it, you have to add a field using AsyncContextAccessor during it’s class transformation. You can find an example for tracing asynchronous tasks here.

HTTP client is an example of a method invoking a remote node (client), and HTTP server is an example of a top level method of a node (server). As mentioned before, client plugins must have a way to pass transaction data to server plugins to continue the trace. Note that the implementation is protocol dependent, and HttpMethodBaseExecuteMethodInterceptor of HttpClient3 plugin and StandardHostValveInvokeInterceptor of Tomcat plugin show a working example of this for HTTP:

One more thing you have to remember is that all the clients and servers using the same protocol must pass the transaction data in the same way to ensure compatibility. So if you are writing a plugin of some other HTTP client or server, your plugin has to record and pass transaction data as described above.

You can run plugin integration tests (mvn integration-test) with PinointPluginTestSuite, which is a JUnit Runner. It downloads all the required dependencies from maven repositories and launches a new JVM with the Pinpoint Agent and the aforementioned dependencies. The JUnit tests are executed in this JVM.

For the actual integration test, you will want to first invoke the method you are tracing, and then use PluginTestVerifier to check if the trace data is correctly recorded.

PinointPluginTestSuite doesn’t use the project’s dependencies (configured in pom.xml). It uses the dependencies that are listed by @Dependency annotation. This way, you may test multiple versions of the target library using the same test class.

Dependencies are declared as following. You may specify versions or version ranges for a dependency library.

PinointPluginTestSuite by default searches the local repository and maven central repository. You may also add your own repositories by using the @Repository annotation.

You can specify the JVM version for a test using @JvmVersion. If @JvmVersion is not present, JVM at java.home property will be used.

If you’re developing a plugin for applications, you need to add images so the server map can render the corresponding node. The plugin jar itself cannot provide these image files and for now, you will have to add the image files to the web module manually.

Then, add ServiceType name and the image file name to htIcons in web/src/main/webapp/components/server-map2/jquery.ServerMap2.js.